Wednesday 24th February 2016 Snaildom is back! After other DSGHQ games were changed, Snaildom just had to return like SnailsChat did. Only, this is so much better!
Keep Slithering

Tuesday 28th October 2014 The new clothes are out for the month! Go to the Store to check out what's new for your snail. 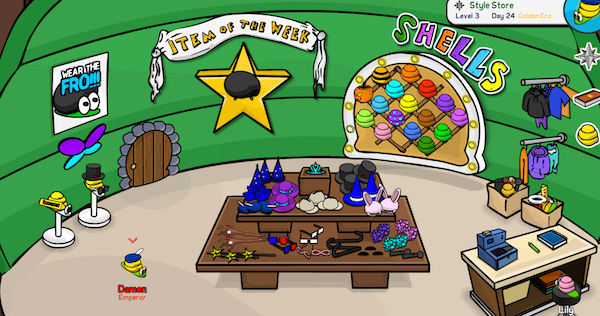 Wise Ones
When you buy the Wise One's Hat, you can use the /wise command to become an official Wise One. When you become a wise one you can say special old man stuff. Also, it's good training for becoming a Royal Wise One.

Healers
With the Healer's Hat, you can become a Healer by saying /healer. It lets you use the /healer command which can heal injured snails in the future when there are battles.

We hope you like the new stuff!
Keep Slithering

Friday 17th October 2014 Get some popcorn! It's time to watch a film! DamenSpike GAMES HQ will host videos on the Snaildom Cinema every week for your enjoyment! Here's what we enjoyed last night!

To get there, go to the Throne Room and enter into the Cinema through the left side openings.

Wednesday 15th October 2014 It's here! The soccer ground of the Games HQ! On these grounds there will be many soccer sportives for people to earn fame and glory. You can also earn gold just by playing the automatic matches through the day.

There are already some special events planned for the DamenBall Grounds.

DSGHQ WCI Fall 14 The DamenSpike GAMES HQ World Championships of Autumn are at the DamenBall Arena this season! It will take place 24th-26th of October.

Bashy's Damen Cup 2015 I will update you on this one in the new year!

Which team are you on? Greens or Reds?

Tuesday 7th October 2014 A fun new multiplayer game was added to the Library. The game is called "Write with Me"!
In this game you and a partner write a story. It can be whatever you want! Taking in turns to write each line, when the game is over you will have made your own story. You can then read it as a Snaildom book. Yet, we need your help to find any other problems and start off the Snaildom Kingdom by enjoying what's on offer! Your ideas and suggestions will also help Snaildom grow into a perfect place for you to play.

Two new games are being made, a racing game and a Knight game... as well as lots of new clothes and quests for next month!

We hope you have a great time on the action packed Kingdom!

Also, why not write a story for Snaildom? Your books can be published into the Library for everyone to read! Just write your story up on the DamenSpike GAMES HQ Forums or email [email protected]!

Thursday 2nd October 2014 The Beta is afoot! Report bugs to [email protected] and remember to collect your rainbow themed items.